The CAS General Committee has, in the light of current circumstances, decided that the forthcoming Athletics season will be cancelled and that the summer sports season will take place as a 5-round competition in Term 1 of 2022.

If there is scope to arrange sporting fixtures safely at any point in Term 4, CAS schools will look to do so as friendly fixtures and within any health guidelines in place.

Knox Grammar School were undefeated during the online debating season to win the CAS Debating Trophy for 1sts debating.

The teams for the upcoming Representative Debating Season are listed below congratulations to these students.

The grounds at Daceyville have been closed and therefore todays finals and championships have also been cancelled. Most of junior sport around Sydney has been cancelled due to ground closures and there is no other ground available.

Selections for the NSWSRU U16s will be based on the games played yesterday and will be posted by Sunday night 27th June.

A solid performance by the CAS students against a tough GPS outfit. Strong performances from Joel Kardash (B), Ethan Halatokoua (W), Tom Morrison (K) and Tom Wood (A) kept the CAS students in the game till the very end. Special mention to Romeo Bray (K), Ethan Halakatou (W), Sam Tapner (B), Jack Black (K) and Tom Wood (A) who received field time in the CAS 1 vs. GPS 1 game.

An incredible display of attacking rugby considering the conditions on the night. Strong ball carries from the likes of Dion Yazdani (B) and Clem Halaholo (W) gave the CAS students forward ball. Solid defence from Ethan King (W) and Charlie Herdman (K) kept the GPS students on their toes all night, and in the backline, excellent performances from Isaiya Katoa (B), Archie Saunders (K) and Aaron Dimovitch (W) kept the attacking pressure on GPS throughout the entire game.

Congratulations to the following students for being selected in the CAS Volleyball team to play GPS. This match will take place on 17 June and will be hosted by CAS at Trinity Grammar School at 4pm.

Training will take place on Tues June 15th for the final team at 4pm at Trinity Grammar School.

Congratulations to the following students that have been selected in the CAS U16s team to play at the NSW Schools Rugby Union trials.

This Thursday 10 June catch all of the action live from Knox Grammar on NSW Rugby TV, powered by Cluch! 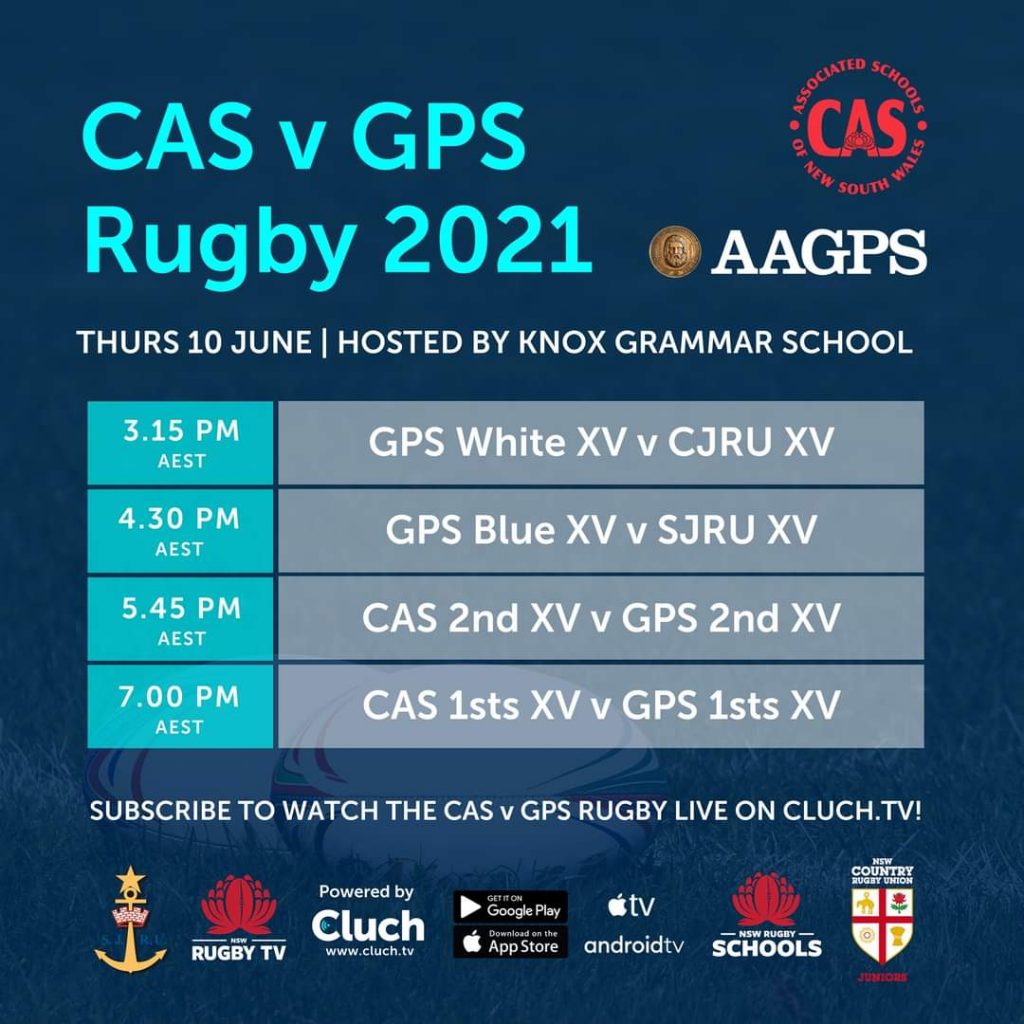 Congratulations to the following boys that have been selected in the CAS AFL team to Play GPS.

The match will be played on Wednesday 16 June at Barker College, kick off will be at 2:45pm .

Training Picken Oval, Croydon Park from 4pm to 5pm on the 15th of June.

Congratulations to the following students that have been selected to attend the trial day for the CAS U16 rugby team.

The CAS U16 trail day will be held at Eastern Suburbs Rugby Union Club Woollahra Oval O’Sullivan Rd, Bellevue Hill NSW 2023 on Wednesday June 9th from 12pm to 3pm. The trials will take the form of skills tests and a game. Players will be scored on each of the skills test and be given a rating on their game performance. Players will be able to access this information after the trial.

Players are asked to trial in school shorts and socks you will be provided with a jersey to trial in on the day (and it is to be returned at the end of the day).

After the trial, the final squad of 25 plus shadows will be selected for the U16 NSW school boys’ trials. The team will be listed on the CAS website on the evening of June 11th.

Matches
Saturday June 19th and Sunday 20 June.
The matches on both days will be played at David Phillips Field Daceyville